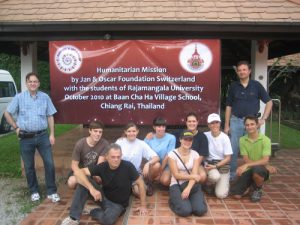 After a long day travelling, it was wonderful to stretch out on the comfortable beds of the Legend Hotel in Chiang Rai. This magnificent hotel, a harmonious blend of western comfort and Thai charm is run by our regional project coordinator, Marc Dumur, originally from Grandvaux in Switzerland.

The next day we left the hotel and headed for the mountains in our four-wheel drive to navigate the chaotic, mountainous roads.

After three hours on the road during which we were shaken about to no end, we finally arrived at our camp in the village of Kok Noi. Here we were welcomed by students and professors from the University of Rajamangala and we shared a wonderful meal together. Later that afternoon, we climbed to the village of Ban Cha Ha, home to the Lahu mountain tribe, where the new school that would replace the old dilapidated one was taking shape. Work was already well underway and the site was buzzing with people, so you had to make room for yourself in order to help out. The girls began to cement a wall under the curious and amused gaze of the engineering students while the boys mixed the concrete (a mixture of gravel, cement, sand and water) to lay the kitchen floor. At the end of the day, our entire team, Thai and Swiss, walked back down to the camp 2 km away for a well-deserved shower and a much appreciated meal.

We rose relatively early the next day despite our desire to stay in bed due to the inevitable jet lag. Our guide and construction project manager, a Professor of Engineering nicknamed Apple, had the good idea of handing out name badges for everyone on site written in Thai and French. This facilitated contact between us and in particular helped us to memorise the foreign-sounding names. Most of the day was spent preparing concrete for laying the floor. We formed a large human chain to pass along the buckets of concrete despite a huge downpour that failed to dampen the enthusiasm of the workers. The wet and cold among us put on dry clothes in an attempt to warm up. The engineering students stayed a lot longer than us that evening because the difficult task had to be completed.

After a wonderful dinner, we returned to our bivouac inside one of the classrooms. We erected four tents where we slept safe from insects and other creatures. Even so, one of the village children brought a cobra to the house and the students also brought us a centipede, a 25cm long insect whose sting can be fatal.

We spent the next day painting the walls. It was so hot that after lunch we had a siesta in a house kindly lent to us by one of the villagers. Late afternoon was devoted to the laundry. The girls washed while the boys watched! Our clothes were really filthy after a few days on site and we had very little left in the way of clean clothes.

That evening, a feast was prepared in our honour and for the first time we ate alongside the students, unlike previous days when we were given preferential treatment, that is to say a table set specially for us. We were uncomfortable with this and didn’t want to be set apart, so we asked to be treated like everyone else. The communal dinner allowed us to strengthen the bonds already beginning to form between the Swiss and the Thais. Music, songs and laughter all greatly helped to bring us closer together. We sampled their whiskey and rice wine and although they drank it in large quantities, we couldn’t help noticing that they rinse their mouth out after every sip to remove the taste which they don’t seem to like at all. We learned a few words of Thai, the engineering students learned a few words of French and email addresses were exchanged, all in a convivial atmosphere.

The fourth day was a holiday in the village of Ban Cha Ha. It was the “new rice” festival, a sort of semi-religious tradition that celebrates the abundance of the harvest, rice being a staple food. To mark the occasion, we gave toys brought from Switzerland to the Lahu children. As this was the first time that Europeans had been to the village, the children had never seen toys like these before. They approached us very timidly at first. We showed them how to assemble Lego, play Memory, model with dough, draw with felt-tip pens, blow bubbles, play Connect 4, etc … After a morning of games, the well-behaved children carefully put away the toys that would soon be sent to the new school. We were invited to join the village chief and his family for a meal, after which we visited every house in the village (30 families). We felt like we were on an electoral campaign tour! We saw for ourselves their way of life and the very simple interiors of their homes on stilts. The villagers greeted us like kings and were full of joy. The children accompanied us happily throughout the whole festival day which was a real contrast to the first few days when, startled by our arrival, they hid in their huts.

The next day we set about finishing work – painting doors, shutters and fences.

The school colours are blue and white and we decorated the classroom, not without difficulty, with the little people in the logo colours of the Jan & Oscar Foundation. Making stencils proved tricky due to the lack of equipment, but eventually everyone got involved, teachers and students alike, and we cut out stencils to apply the desired shape and colour. The villagers also lent a hand and made a bamboo fence to enclose the school.

authorities and bid our farewells. The village chief, deeply moved, received the school officially on behalf of the University of Rajamangala and all the students and teachers who participated in its construction. The Jan & Oscar Foundation, who provided the funding, was also honoured at the inauguration and we enjoyed a celebratory meal in the new school.

The same evening, our last together, we surprised our Thai friends by giving a little performance of song and dance. In turn, they honoured us with a display usually performed on the occasion of their graduation from university. At the end of the evening, there was another surprise in store. We lit lanterns that rose into the sky, carrying with them, as tradition dictates, everyone’s secret prayers.

It rained very hard during our last night and the following morning, the day of our descent to Chiang Rai, we found that the roads had been replaced by rivers of mud. Laurence prudently asked us to get out of the car, the wet dirt track having turned into a mud slide. The police escorted us in safety back to the city while taking control of the car while we made our way down the steepest point on foot. We climbed back into the cars once the terrain flattened out and arrived at the river bank where a canoe was waiting to take us to the Legend Hotel in Chiang Rai, situated on the Kok River. Halfway there, we stopped at the Karen village of Ruammitt for a wonderful elephant ride in the jungle. Returning to civilisation, we were greeted with a delicious lunch, after which we visited the “white temple” outside the city of Chiang Rai – what a treat for our European eyes! This modern temple, decorated with concrete and pieces of glass, is quite remarkable. On our return to the hotel, we all enjoyed a traditional Thai massage which did us a lot of good after all the manual labour. In the evening we met up with the students we had left that morning for a drink in a nightclub. The language barrier wasn’t a problem as the music was so loud that we couldn’t even hear anyone! It was a colourful evening to say the least! The Asian girls, in a bid to look European, looked like Barbie dolls and we also met a transvestite who, intrigued by our presence, came to talk to us. The evening ended very late, after much fun and laughter.

We rose after only a few hours sleep. We didn’t leave the nightclub until around 2 a.m. but the following day’s schedule wouldn’t wait. Our first stop was the opium museum. The visit made everyone realise for the first time the disastrous social and economic consequences that the drug trade has had throughout south-east Asia. The museum was very informative. The day continued with a visit to the Queen Mother’s chalet at Doi Tung with its lush gardens. We then stopped at Mae Sai to see a small border town separated from Myanmar by a bridge. It was a bustling place with stalls selling various products from Myanmar. Hot chestnuts and mushrooms were for sale on the stalls, alongside local handicrafts.

We left the Legend Hotel the next morning and headed in the direction of Bangkok for the province of Uthai Thani where Michele Bise was waiting for us. We had no sooner arrived than we were heading for the refuge that Michele founded some years ago with her friend Sombut. They take in and tend stray dogs from Bangkok. We were delighted to see a litter of puppies only a few weeks old. We were greeted very warmly and spent the night at Sombut’s house after being taken out to a typical restaurant.

The next day, we got up at 6 a.m. to go to the temple. It was the end of Buddhist Lent and a special ceremony was taking place. All the villagers of Nong Chang were present and made offerings to the monks who passed by in a beautiful saffron-coloured procession. We too made offerings of food and, as a sign of respect, we had to remove our shoes before giving them our parcels. Being there was a great privilege as we were the only foreigners. After the ceremony, we visited some schools to see projects undertaken by the Jan & Oscar Foundation. We met families whose lives brought home a cruel and harsh reality. Particularly moving were encounters with a dying man anxious about the future of his daughter, a quadriplegic tended by his loving wife and daughter who was a nurse, and a 6 year old orphan girl facing an uncertain future. Yet again, despite widespread poverty, the people were tremendously generous and invited us to share their meals. They felt honoured that we accepted their invitation.

Before we left for Switzerland, we made a final visit to the shelter to play with the puppies and give them new names.

The sights and the scenery were truly breathtaking, but it was above all the kindness, openness, respect, curiosity and tolerance of the local people that touched us the most. 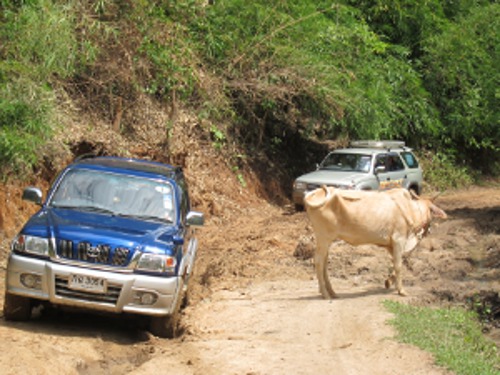 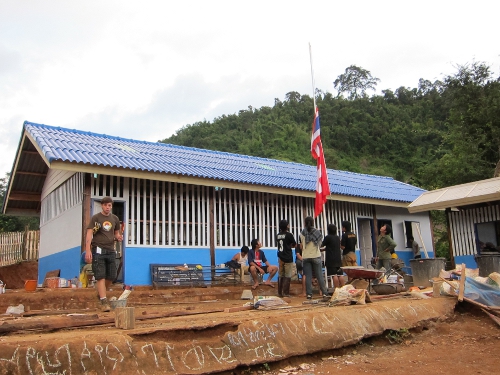 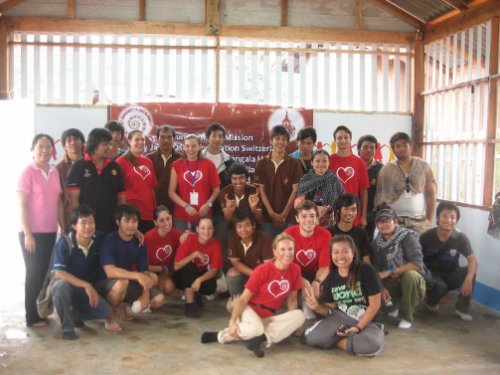 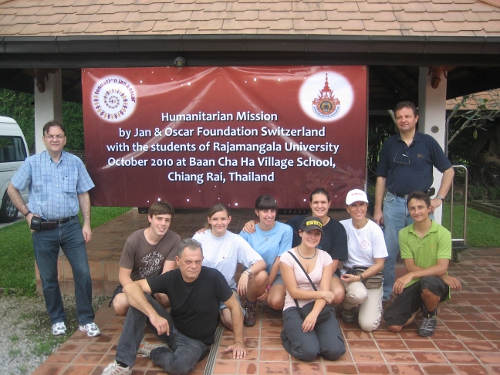 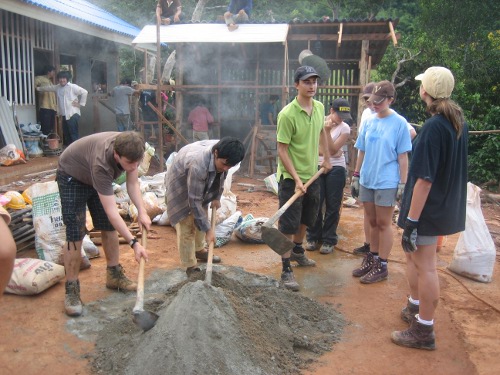 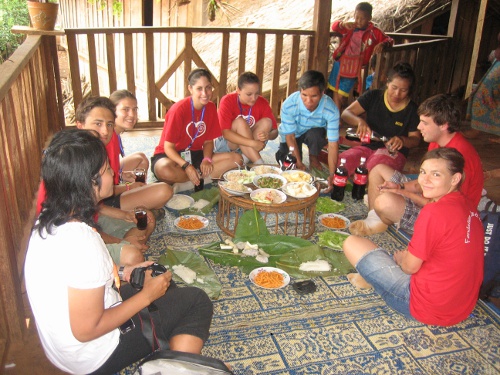 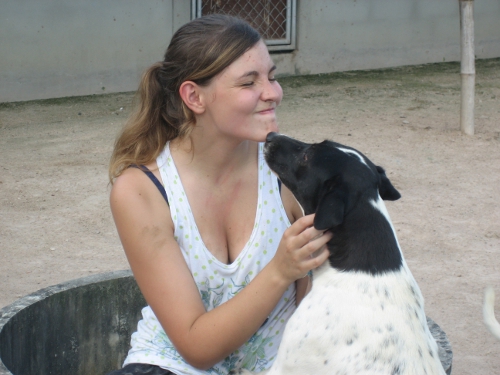